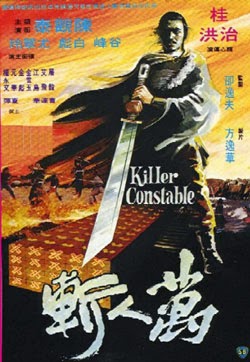 When a huge shipment of gold goes missing a constable is sent to track down the men responsible. A no nonsense sort of a guy his method for dispensing justice is to kill the accused out right. This kill first attitude doesn't sit well with his brother who refuses to join him on the quest. Gathering up some reliable men the constable heads off to catch the bad guys and he'll let nothing stop him.

Bleak wu xia film is kind of akin to a Dirty Harry movie, but without the jokes. Actually its a series of bloody fights that leave a good number of people on all sides dead or dying. As an unending series battles this is exactly the sort of film that's perfect for a rainy Sunday when one can curl up with a big bowl of popcorn and beverage of choice. This is exactly the sort of film that drew in any number of my martial arts loving friends who fell in love with the constant action.

As a dramatic movie I'm not too sure it makes a whole hell of a lot of sense. There are times when the plot gets lost among the flashing swords. That doesn't mean that the film is bad, rather it's just a reminder that these films were never Shakespeare.

If you want to see a super action film that will leave you exhausted by the end make an effort to see this when it plays at the Asia Society tomorrow. Actually if you've never seen a Shaw Brothers martial arts film on a big screen you must make the effort to see this.

Say what you will about the film, it kicks serious ass and I can't wait to see it again with friends.

For more information and tickets go here
Posted by Steve Kopian at July 12, 2014