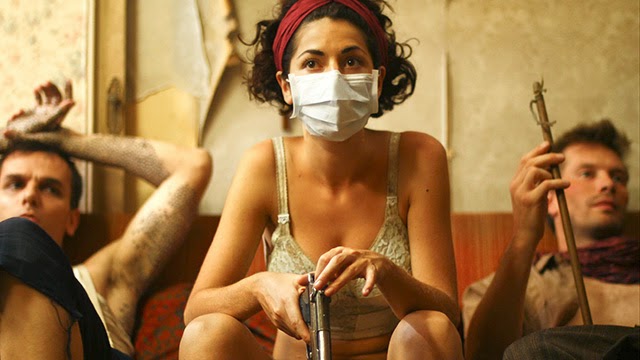 Axel, Ana and Jonathan live together in a small place locked away from the world. It seems that the world has gone to hell in a zombie apocalypse. They record video confessions. They lust unhealthy for each other...and then they bring home a zombie.

You know this isn't going to end well for anyone.

Give writer/director Christoph Behl for going off the board and doing something different. By not going the way of pretty much every other filmmaker working in the wildly over used zombie genre he's found a small little plot of land  to call his own. Actually he's found a plot that that is right next to the godfather of the genre, George A Romero.

Actually what the film feels like is a riff on The World, The Flesh and The Devil about what happens after an atomic war. While decidedly not as weighty on world issues as that earlier film, the film is still a cousin with its examination of the triangle dynamic.

This is a really good film. How good I'm not sure simply because the novelty of a real live cliche absent zombie film has left me walking on air. Actually if I'm considering this as a film thats a direct heir to Romero's work the film must be really damn good since I could make the comparison if it wasn't on that sort of a level.

Worth a look for those who want intelligent horror, or off beat romances and hate what the zombie genre has become.

The film plays tonight and August 5th at Fantasia. For tickets and more information go to the film's festival page here.
Posted by Steve Kopian at July 27, 2014