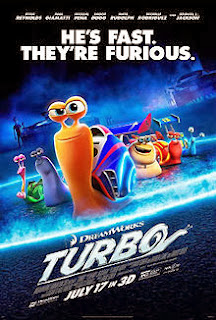 The four year old of a co-worker loved Turbo.

Most kids I know loved Turbo.

Most parents I know loved that their kids loved Turbo.

I feel like a Grinch for not liking Turbo. No wait make that I feel bad for not loving Turbo.

Turbo is the story of a snail who dreams of becoming a racer and going fast. He dreams that someday he’ll be a great racer. When circumstance douses him with a combination of chemicals including a healthy dose of nitrous oxide he’s given the ability to out run pretty much anything. Through circumstances and a nice guy who wants to make his and his brothers Taco stand successful he ends up racing in the Indy 500.

It’s a sweet story without the typical current cultural references and smart ass remarks. This is a rare thing in modern American big studio animation a story that is all about the characters and story. It’s a sweet little story about following your dreams no matter where they take you and no matter who tells you you can’t. It’s a throwback to old school Hollywood tales and the sort of films they don’t make any more…

… and it bored me to tears.

Yea I know its everything I rant against in American animation and they’ve turned out a really bland film that I can’t recommend to anyone over over, say, the age of 6.

What happened? This is the sort of film I’ve been calling for for years and when it comes it disappoints. Why?

I’m guessing that in reducing the film down to its most basic elements they didn’t give themselves all that much to work with. There are no subplots, simply the story of Turbo. While its good and uplifting, its too cliché for anyone over a certain age and without subplots the pacing is snail like (I’m sorry).

Its not bad, but at 96 minutes the film is wildly over long

On the other hand my niece loved it and I’ve heard reports of kids screaming and cheering in the theaters where this played. For small kids give it a shot, but for big people give it a pass.
Posted by Steve Kopian at July 31, 2014