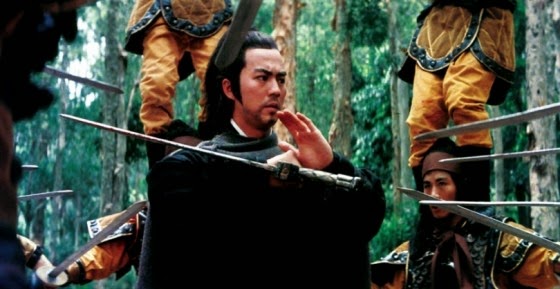 The plot of the film has two enemies meeting a year after a previous duel to fight to the finish. They end up interrupted by assassins who want to kill them. They end up joining forces to defeat them and end up on a quest for mystical weapons (the Peacock Darts) and some other stuff. There are demons, bare breasts, ninjas, weird weapons and lots and lots of fighting.

I’m not going to lie I have no idea what the happened. I don’t think anyone does. I’ve only really found one kind of synopsis of what happened on line, mostly people talk about the fighting, which is completely understandable because its wicked cool.

The action is the reason this film exists. It’s a series of widescreen battles (and they are widescreen so see this big if you can) that are pure poetry of motion. Swords clash, ribbons billow, bodies fly and magic happens. It’s a grand martial ballet of the sort that hooked generations of film fans on wu xia films. Its great and glorious and almost makes up for the missing plot.

As eye candy this film is great. This is the sort of film that you watch over and over again just to watch the motion. The trouble is the plot line is more plot idea. Yea there is a sketch and kind of through line, but you really have to take much of it on faith and rely on archetypes to keep things going. The result of this is that this is a film where you admire the pieces more than the whole. I know I’ll be talking about the fight scenes and the visuals long after the plot has faded from my mind…which was about twenty minutes after the film ended.

Should you see this? Absolutely. Actually if you can get to the Asia Society tomorrow and see it big it’s a must because this is way cool.

For tickets and more information go here
Posted by Steve Kopian at July 13, 2014