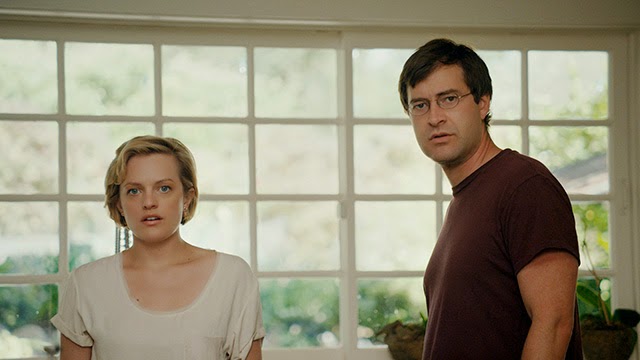 Sorry to the handful of you who read this when it originally posted, it reads much better now. This piece has been something I've been battling with for a while now and I let it slip out with truly mangled language because I tried to play by a restriction that really makes no sense. You'll see what I'm talking about below.  I've revised the piece and changed it to a non-review because I really can't talk about the film the way it needs to be discussed.

A couple in crisis go a way to a house in the country that their therapist recommended as the perfect getaway place. He says what they will find  what they are missing there. They do.

I can't tell you any more than that since the whole film hinges on something that the producers do not want to be revealed. The problem is that if I don't talk about what happens I can't really review the film. I don't see what the big deal is but they seem to think not knowing is really important. Personally I don't think it's anything special. Its nothing we haven't seen on any number of TV anthology shows.

What I can say is that as a whole film this film didn't float my boat. This look at a long term couple in crisis is okay, but I never connected to them or their plight. I never really cared. Blame my lack of a long term relationship or the film just not being that good as to why I didn't relate.

As to how you're going to react to the film I won't guess since when this played at Tribeca, the reaction of the people I talked to were split into the "this is really good" and "what's the big deal" camps. Put me in the latter.

The film plays later today at Fantasia.
Posted by Steve Kopian at July 26, 2014