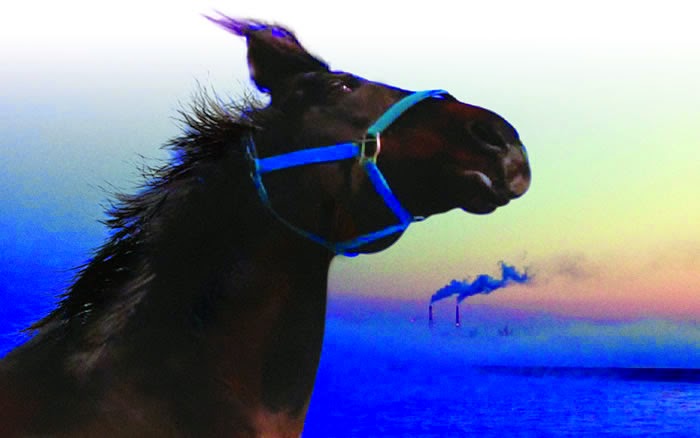 Every year since the earthquake/tsunami and nuclear disaster that rocked Japan and the Fukushima area in particular the Japan Society has always included films in the Japan Cuts selections that highlight the aftermath of the tragedy. This year’s selection is the Horses of Fukushima a is a look at a stable full of horses that survived the tsunami in March if 2011 only to run into problems in the weeks that followed. The film also follows the horses caretaker as he tries to keep them alive despite great odds.

The relationship between men and horses goes back a thousand years in Japan. Every year the relationship was celebrated in the Fukushima area with a horse festival. The horses were housed in a stable that somehow survived the Tsunami. However the nuclear leak made caring from the horses impossible and declaration to kill all of the livestock in the restricted zone threatened their lives. It’s a tough story and if you’re an animal lover some of this will break your heart (it’s not for the squeamish). It will make you wonder about what we would have done if we were put in charge of some beautiful animals such as these.

I’m mixed on the film. While I think it’s an absolutely gorgeous film at times with a wonderful eye for making the horses look spectacular, some of the film is a bit too repetitive. Yes I know the horses did spend a great deal of time penned up, but After a while I wished I was looking at something else. On the other hand the struggle to save the horses, from lack of funds to government edicts and other large obstacles is compelling.

The film is playing Tuesday at the Japan Society as a lead into remake of Unforgiven.

For details on the film of for tickets for Tuesday's screening go to the Japan Cuts page here
Posted by Steve Kopian at July 13, 2014