The latest on Jimmy Wang Yu, for those playing the home game is the problem is he had multiple residences listed on his paper work which mucked things up, not anything illegal. So say the NYAFF staff.

I only did two movies today. I decided to bail on the NEW WORLD for a couple of reasons which I won't get into. It was a quiet day all around. 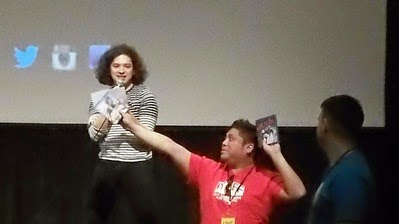 MONSTERZ is a remake of the Korean film HAUNTERS from a couple of years back. This time out Hideo Nakata (Dark Water,The Ring) decides to remake someone else's films instead of having one of his remade.

The plot has two super powered humans, one able to control anyone he sees and the other with super healing, who is unable to be controlled battling it out.

The first film was okay, action packed and some what silly. This time out they removed a lot of the action, changed the rules and added some twists (hints of a mutant race mixed in with mankind) with the result the film's internal logic is broken and the film is incredibly laughable. Things don't hang together with the villain able to mostly continue to control people past his seeing them, and some times not. Also the  cost of using his power  withers his limbs, but after his hand withers in one sequence its fine later on. None of it makes any sense.

I took a long trip to the men's room just to get away from the film.

I think the best way to describe the film is stupid. It could have should have been something but it's just dumb. 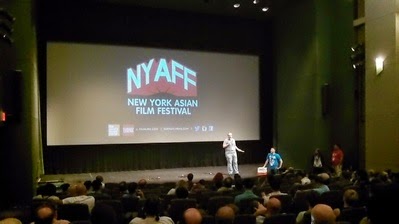 The film has a dojo wiped out by Karate wielding guys from Japan and Wang Yu's quest for revenge. The plot is as simple as they come, even more so than most films that riff on the get revenge for the master theme. It's very silly not because its now cliche, but because what happens is really damn silly.

On the other hand the action is damn entertaining with lots of blood, lots of blindings (yes Mondo this film would have put you in trouble)  and dead people everywhere. As an action film its quite good, as a drama it's laugh you ass off material.

After that I said good bye to Mr C who dropped in for some classic Kung Fu and headed home.

I've got four reviews going up tomorrow and I have two or three each day until the weekend.

I'm done with the festival at Lincoln Center, I'm over at the Japan Society starting Thursday so look for reports on the weekend.
Posted by Steve Kopian at July 06, 2014