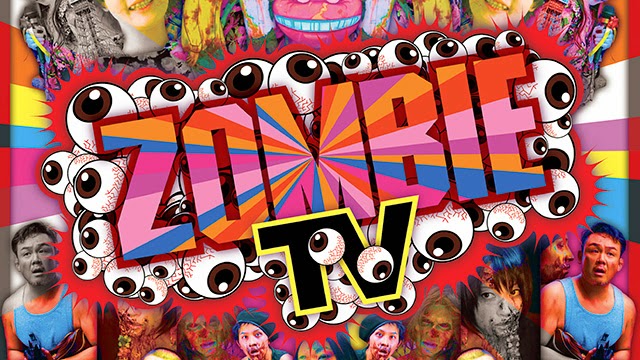 With Yoshihiro Nishimura (Mutant Girl Squad and Hell Driver) as one of the directors you know what you're going to get, low brow, bloody humor and Zombie TV is just that.

Opening with a J-pop zombie song from the pit of hell the film then riffs on a day of TV programming with dramas, exercise shows, travel shows, cartoons, wrestling (with a decidedly non PC character), superheros, sex instruction and assorted other stuff.

The sort of thing best watched with friends or at a midnight movie screening with an audience of like minded crazies. Its bloody, and funny and utterly tasteless. When it works its good fun.

The trouble is that as a movie and not a shared experience this isn't all that hot. If you can't kibitz with someone the bad jokes and occasional dead spots (some bits go on too long or are repeated too much) make this less than must see TV. This is probably Nishimura's most all over the place film

On the other hand if you're locked and loaded with friends and drinks this is a must see.

Zombie TV's one screening at Fantasia was last night at midnight. For more information on the film go here.
Posted by Steve Kopian at July 20, 2014